Man Enough to Be a Girl Scout

“It’s nice for girls to have good male role models other than their own dads and I hope I am one.”

While Girl Scouts is often thought of as a mom-and-daughter activity, there are actually a number of dads who are volunteers, helping Girl Scouts realize their potential.

One such dad in Greater LA is Paul Coyne, leader of Troop 4491. Though he works as a TV producer, Paul says his real full-time job is being a father to his eight-year old daughter, Bailey.

A single dad, Paul never expected to become a Girl Scout leader but, as a former Cub Scout, he thought his daughter might enjoy a similar experience. Paul has been throwing Halloween parties for Bailey and her classmates since she was two, and one year, Paul asked a group of moms if they had any plans for Girl Scouts. One of the moms laughed and said, “Paul, didn’t anyone tell you? You’re going to be our troop leader!” Paul shrugged and said, “Okay, I guess I’m a Girl Scout now.”

Troop 4491 grew from Bailey’s pre-K classmates and then their friends. Paul took a crash course in Girl Scouts, completing online training: “I liked that Girl Scouts is about inclusiveness, respect, and philanthropy, things I have always stressed as a dad.”

Every meeting begins with a ritual, as each girl places a daisy into a vase until it is full: “This demonstrates that we are beautiful as individuals but glorious when we come together.”

According to Paul, he was also lucky to find supportive parents, and co-leaders, Christina Rice and Kristina Yepes: “[They] have strengths that I do not. It’s a huge relief since I am a single parent with a job I’m dedicated to.”

Although Paul enjoys planning meetings, he admits it’s a challenge sometimes: “I just do what seems meaningful. I want the girls to learn by having fun, and apply lessons to their own lives.”

At one meeting—for example—they discussed the three T’s of philanthropy: “Giving your Time, Treasure, or Talent.” The Girl Scouts then made tie-dye shirts and, placing them into bags, stood in a circle.

“Now that you’ve put time and talent into your treasure,” Paul told them, “Give your shirt to the girl beside you.”

Paul expected groans—but was pleasantly surprised: “Never underestimate Girl Scouts. They were thrilled to create something that would be enjoyed by someone else. I also learned to ALWAYS let parents know if things might get messy!”

Some meetings are thrown together at the last minute while others take time to prepare: “A genealogist visited once and discussed family trees, one of my hobbies,” Paul says. “I had done my research and revealed three Girl Scouts were distant cousins. One girl also learned she was Louisa May Alcott’s relative and two were Mayflower descendants. I told them that it took thousands of years to make the ‘perfect you.’”

Not every meeting has been joyous. One girl lost her father to cancer this year and the troop discussed life, death, and love. They asked if they could donate a portion of their cookie sales to a cancer charity (and during cookie season, they accidentally went viral when Nick Jonas visited their booth)! The troop raised $1,000 for their cause.

Paul has learned a lot himself over the past three years. Some of his tips:

1. Listen to the girls and incorporate their ideas. This is FOR them but it should also be BY them. Their ideas are inspiring.
2. Ask troop parents to invite friends as lecturers. My Little Pony comic artists gave a drawing class, an Irish dance instructor taught them to jig, and children’s book author Brandy Derrick (Ava’s Special Tooth) discussed not giving up on a dream.
3. Some girls will be more into it than others. Paul has seen shy girls blossom and “alpha” girls become team players.
4. Create meeting badges, like Dues Collector and Clean-Up Leader. They become weekly emblems of honor.
5. Put on a talent show. From rock collecting to rocking out on the piano, everyone has a gift to share.

Paul knows that it is not common to see a male Girl Scout troop leader, but he encourages other dads to give it a try, even as a co-leader: “It’s nice for girls to have good male role models other than their own dads and I hope I am one. You feel like you’ve made a difference when a Girl Scout tells you they practiced something they learned out in the real world. Though my eight-year old Cub Scout self might make fun of me for saying this, I love being a Girl Scout.” 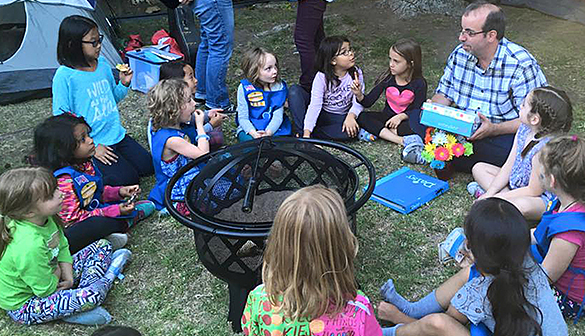 Happy Father’s Day to all the awesome Girl Scout dads and volunteers who are helping to empower girls to step up as leaders and active citizens in Greater LA and beyond!

Ready to help girls stand out as G.I.R.L.s through Girl Scouting? Find out how you can volunteer.

4 comments on “Man Enough to Be a Girl Scout”

The problem is racism.

How to get the word out about your donation drive